Namibia and the entire Southern Africa region must beef up energy efficiency if they intend to watch the 2010 World Cup spectacle with all lights on. On top of the ‘must-do’ list is the review of regulatory frameworks, power tariffs... read more

German biogas plant manufacturer Weltec BioPower hopes to have one of its plants in operation in South Africa soon... read more

A significant challenge preventing the development of the envisaged Lake Kivu gas-fired power generation project, on the Democratic Republic of Congo (DRC)-Rwanda border, is a lack of capital,according to chemical engineer Philip Morkel, who is also the technological developer, owner, operator and financier... read more

Letter to the President of Ghana

Welcome to the „Land of Ideas“, as the Germans like to refer to their country. There is no shortage of inventions originating from Germany: the doctorate degree, the printing press, the aspirin, the diesel engine and the sausage in all its flavors and textures, ranging from Frankfurters to Bratwurst!

The Germans are not famous for delays; if anything, they are well-known for their punctuality, unmatched attention… Continue

Ghanaian officials at the U.N. climate change conference in Accra are publicizing a plan to harvest submerged timber from underneath the man-made Lake Volta. Brent Latham reports from our West Africa bureau in Dakar... read more

This is in fulfilment of the promise by Lagos State Governor, Mr. Babatunde Raji Fashola, to pursue a policy of public private partnership in infrastructure development.

In a further show of commitment to its positioning as ‘The Green Bank’, Nedbank Corporate Property Finance has confirmed that it will be the principle sponsor of the inaugural Green Building Council of South Africa (GBCSA) Convention and Exhibition, to be held in Cape Town from 2 – 4 November 2008... read more

The biggest solar power project in East Africa, which is being implemented by a German Solar Energy Foundation, is achieving its milestones by installing 2,000 solar systems in/around Rema village in Ethiopia. The project has realized a supply of power to 5,500 residents in the country... read more

What this space: Africa is fast becoming an important player in cleaner energy sources. If only 0.3% of sunlight falling on the Sahara and Middle Eastern deserts can potentially provide all of Europe’s energy needs because of its intensity, according to a report, how about everything else?

How much wind blows from Nouakchott to Natal, and how much of this is ever utilized as an alternative energy source? How much water flowing in the… Continue

For Maasai tribesman Charles Kamami, Kenya's drive to boost its geothermal capacity spells environmental destruction which threatens his pastoralist way of life.
But for east Africa's largest economy, geothermal energy could be a savior as it struggles to increase power generation to keep up with soaring demand driven by years of robust growth... read more

What Future for Coal in South Africa?

Ethiopia powers up with solar energy

Germany's Solar Energy Foundation aims to improve living conditions and foster a solar industry in Ethiopia. The rural village of Rema in Ethiopia could become a cleantech boom-town if the work of Germany's Solar Energy Foundation continues its success in the region. Since 2006, the foundation has installed 2,000 solar systems in Rema and in nearby Rema ena Dire, the biggest solar power project in East Africa... read… Continue

Uganda is among the least powered African nations with reliable electricity a wide spread problem. Current statistics from the Ministry of Energy show that 95% of Ugandans have no access to electricity from the national grid. Even when the World Bank recently approved a $360m loan to build a power station at the Bujagali Falls, the project can only help alleviate Uganda's power shortage problems from 2011... read more

The powerful National Union of Mineworkers is on a collision course with the government over the latter’s plans to invest R400billion into nuclear energy by 2025. A document marked “Strictly Confidential”, authored by the South Africa Power Project and Eskom, says that the government will invest R24billion in the research and development of pebble bed modular reactors (PBMRs)... read more

On his first trip to Ghana in September 2006, Mark Henderson traveled through countryside that was lush, but obscured with haze. The haze was the first thing Henderson saw when his plane landed in Accra, the most populous city in this West African country on the Gulf of Guinea... read more 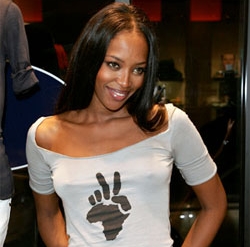 Naomi Campbell was in Abuja, Nigeria, on Friday where she attended and participated in the launch of The Abuja Green Society’s campaign to plant a tree for every baby born in the region’s hospital in hopes to ensure them a better future... read… Continue

Gordon Brown yesterday hailed efforts to tap in the power of the North African sun to European power grids at the Mediterranean Summit in Paris... read more

In a first for South Africa, Darling Wind Power, an independent power producer with BEE shareholding credentials, officially opened its wind farm in May. This national demonstration wind farm has four wind turbines that can supply 5,2 megawatts of electricity... read more

Philips has signed an agreement with the Dutch government to form a partnership that will develop a new generation of sustainable solar-powered lighting solutions for Sub-Saharan Africa... read more

About 185 MW of South Africa’s electricity could be generated by wind in 2010. With power utility Eskom’s current installed capacity measuring 38 000 MW, this will be about 0,5% of capacity... read more